The statement passed with 82.6% out of 167 written votes cast by professing members during a church conference. The vote was originally scheduled for March, but was postponed because of the pandemic. In the end, Onalaska UMC hosted a hybrid conference with an hour of discussion mainly on Zoom, and drive-through in-person voting for two hours.

Pastor Park Hunter said, “It was amazing to see car after car of church folks come through. So many smiling faces - so many people happy to see each other during this difficult time. I know we don’t all agree on this issue, but it’s clear we’re all still committed to loving God and loving each other.”

Responding to the vote, college student Ruth Hallstead said, “It’s a good day to be a member of Onalaska UMC. Not only seeking to do no harm, but going above and beyond to make a safe space for everybody to worship as one.”

Praise team member Pam Klinger added, “It warms my heart to be part of not only a church that is inclusive, but a church that was brave enough to take a stand."

Onalaska UMC’s church council voted in March 2019 to begin the reconciling process following the disarray at General Conference 2019. A team of volunteers led by Kelly Dunn and Sue Weber organized opportunities for people to study scripture, read books, pray, discuss, and draft a reconciling statement. After conducting a congregational survey, they learned that most people wanted to hear personal testimony and preaching on the topic of LGBTQ inclusion. Fifteen church members, from youth to seniors, shared their personal witness during Sunday services. Pastor Hunter preached a month-long topical series, “The Methodist Way,” applying Wesley’s three General Rules and the Quadrilateral. 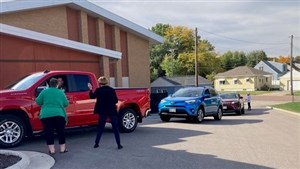 Dunn noted, “I believe that the vote to approve a reconciling statement is a bold and timely action.  First it sends a clear message to the La Crosse community that all people are welcome to worship at Onalaska UMC.  But most importantly as Christians we clearly say that we affirm LGBTQ people as well.  Sadly, we are aware that they are not affirmed at other churches and that can be very harmful.”

The church’s reconciling statement, as well as videos of testimony, sermons, and resources from their process, are available at the Onalaska UMC website.