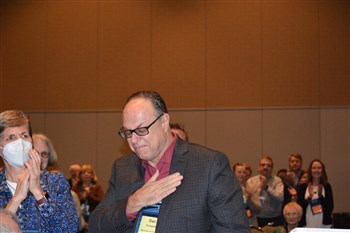 
The Rev. Dan Schwerin, Assistant to the Bishop for the Wisconsin Conference, has been elected as bishop in The United Methodist Church's North Central Jurisdictional Conference.

Delegates elected Schwerin on November 3 at the jurisdiction's meeting in Grand Wayne Convention Center in Fort Wayne, Indiana, on the sixth ballot. He received 100 votes out of 166 valid ballots cast. He needed 100 to be elected. (60% of valid ballots)

Schwerin was the third and final bishop elected at the Nov. 2-5 meeting. He proclaimed his joy, gratefulness, and hope for the call received at baptism.

The assignments of bishops in the North Central Jurisdiction for the next two years will be announced on Saturday. His two-year term of service begins Jan. 1. In the United States, bishops are elected to serve for life.

The Wisconsin Conference endorsed Schwerin as an episcopal candidate for election. He expressed gratitude for the bishops that have served as mentors.

"A deep bow to the bishops that have blessed me, my three mentors, Bishop Sharon Rader, Bishop Linda Lee, and Bishop Hee-Soo Jung," said Schwerin. "I would not be the Christian I am had I not looked over their shoulder.”

For 35 years, Rev. Schwerin has enjoyed many contexts for pastoral ministry, including urban and rural churches; a new church plant; a multi-staff downtown setting that became a reconciling congregation and launched a beloved community of non-profits to benefit persons with disabilities, children dealing with grief, persons who wanted help to battle generational poverty, and children who desired access to stringed instruments, lessons, and a community who would enjoy their growth in musical ability.

In 1991, he was ordained as an elder in the Wisconsin Conference. Schwerin graduated from Perkins School of Theology in Texas and did post-graduate Bowen family systems theory work there.

Schwerin is a published poet. In 2019, he received the Haiku Foundation Touchstone Award for Distinguished Books.

In The United Methodist Church, bishops are ordained elders who are called to "lead and oversee the spiritual and temporal affairs of The United Methodist Church." Bishops, in consultation with district superintendents, are responsible for appointing clergy. They also preside at annual conferences, jurisdictional conferences, and General Conference, the denomination's top lawmaking assembly.

He and other new bishops are coming aboard as the denomination deals with the continuing fallout of the COVID-19 pandemic and rising congregational disaffiliations amid a denominational splintering.

In his final post-election remarks, Schwerin stated, "I want to begin this time together in deep gratitude for the baptism that sustains our call forward."