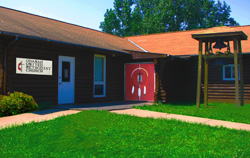 The Odanah United Methodist Church was dedicated on April 3, 1898 by A.J. Davis of the Ashland District. Its founder and first minister was Thomas C. Thomas, an ordained Ojibwa Native American from Michigan. Thomas was a member of the West Wisconsin Conference of the Methodist Episcopal Church and was elected during his time to be a delegate to Washington DC.

The current ministry has a Friday evening Soup for the Soul prayer/study group, and participates in a community prayer ecumenical group in nearby Ashland. The church has a small elementary Sunday school and hosts several VIM groups during the summer months.

The Oneida Church is close to 200 years old and the oldest church in the Conference, having brought the Methodist Societies to Wisconsin from New York. The church is open to all people as well as all Native Americans. The Oneida Church is committed to walk alongside the traditionalists, while bringing the gospel to them in a culturally sensitive way. There are 80-100 in worship every Sunday with larger gatherings on holidays and special events.